CloudPull 2.1 is an update with that adds these improvements:

Downloading email messages in CloudPull 2.1 is about four times as fast as in version 2.0.3. CloudPull now creates up to four simultaneous connections to the mail server for each account to achieve this major performance boost.

In order to keep Google's IMAP servers running smoothly for all of their customers, Google has IMAP usage limitations. Google enforces IMAP usage limitations by throttling back the speed at which it responds to IMAP clients and by temporarily disabling IMAP access after excessive usage. In order to avoid IMAP access speed being throttled back by Google, CloudPull now throttles back its own usage. CloudPull now only downloads 5,000 messages per account per backup cycle by default. Therefore, it may take several backup cycles after the initial setup before all email for an account is completely backed up.

While the message throttling offsets some of the benefits of the faster downloading, the end result is that CloudPull spends far less time downloading email messages.

More details about the throttling are available on a separate page.

CloudPull 2.1 provides an Activity window, allowing you to better monitor the progress CloudPull makes while it performs backups.

This window can be shown by selecting the “Activity” menu item from the CloudPull status menu.

The “Google Accounts” tab of the Preferences window has been overhauled. This view makes it easy to determine what services are being backed up for each account. In addition, the “Account Settings…” button makes it more apparent how to change settings for an individual account. 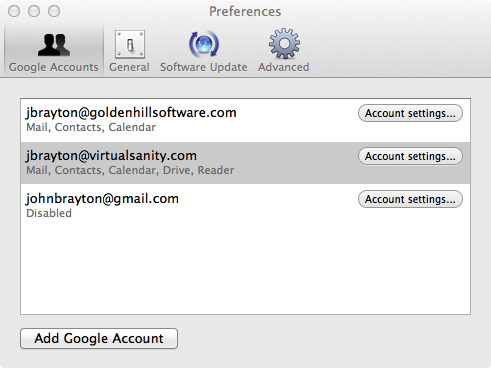 In addition, the view allowing you to select which labels you wish to back up has been improved:

While CloudPull already worked with Google Drive just as it had with Google Docs, CloudPull 2.1 contains updates to the user-presented text to reflect the name of the service changing.