With the Google Reader shutdown planned for July 1, this update focuses on supporting customers in preserving and exporting Google Reader data.

In addition to letting you restore bookmarks of Starred, Shared, and Liked articles as Web Location files, CloudPull now allows you to export these lists of articles as HTML Bookmarks files, suitable for importing into Safari, Chrome, or Firefox.

This option is available by right-clicking on the applicable item in the left navigation pane of the main window.

If you are running CloudPull as a foreground app, the ability to export your subscriptions and lists of articles is also available in the “File” menu.

The ability to save bookmarks in these formats is a benefit to using CloudPull to export your Google Reader data. While Google Takeout also provides your lists of Starred, Shared, and Liked articles, it serves that data in a JSON format. The JSON format is suitable for reading and manipulating the data programmatically, but not for simply importing those articles into your browser bookmarks.

With this update, customers who have not purchased premium features can now see the backups folder path in the General pane of the Preferences window. 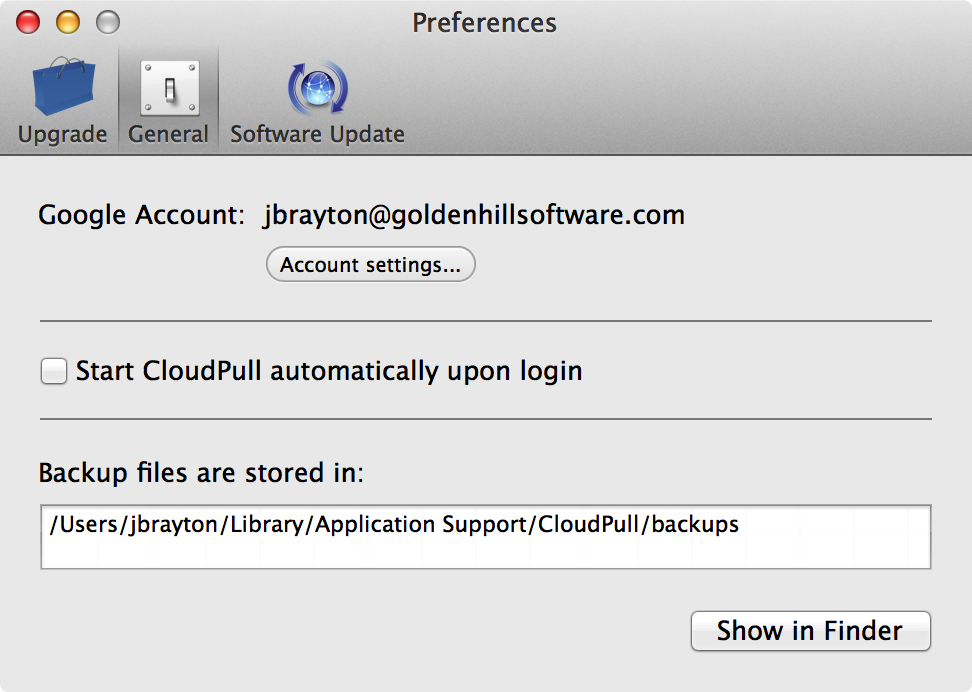 This change does not affect customers who have paid or who are within a 30-day trial. Paid and 30-day trial customers can see and change the backup location under the “Advanced” tab.

Just before the Google Reader shutdown I will release a CloudPull update that disables backup of Google Reader. The app will continue to provide access to existing Google Reader backups.

If you are looking for an alternative news reader, I recommend NetNewsWire. I used NetNewsWire before I switched to Google Reader several years ago. The app was great then and it is great now.

NetNewsWire has not seen any major updates for quite some time and it uses Google Reader as its syncing mechanism. However, Daniel Pasco tweeted Friday evening that the app is under active development and that his company is working on a new syncing mechanism. Daniel is the CEO of Black Pixel, the company that owns NetNewsWire.

Instead of looking for an alternative news reader, you might choose to rely on social networks for online news feeds. If you have been following this blog on Google Reader and choose not to use a news reader going forward, please consider following Golden Hill Software on Twitter, App.net, or Google Plus. You can also subscribe to the company mailing list, where I send only the biggest product announcements.